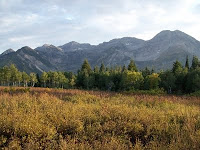 I love horseback riding. It was almost exactly a year ago that I rode for the first time...

On September 13, 2008 I wrote:
"Bishop Johnson took me out on his horse. I didn't know that was the plan, and at first, I really struggled because I felt guilty not hiking. At the same time, I loved it! I loved being in the mountains - moving and exploring without feeling the exhaustion of hiking. It was so awesome!"

I remember that first time riding... I remember how hard it was to let myself even get up on the horse, and then to admit how much I loved it. I was trying to figure life out... I spent a lot of time writing in the crap journal (a wonderful therapy assignment from Paul... I hear he likes to give that assignment to all of his patients now... poor souls!) 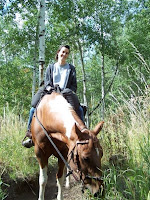 A week later, we went riding again. This time, we got lost... well... not lost, we just kept going in the wrong direction. That day changed me forever! I was dealing with all kinds of crap back then, and I didn't know where it was all coming from. I had just come home from CFC and was a mess... I was eating better, but not really where I needed to be. I wasn't sleeping, and I was barely BARELY surviving. I was dealing with flashbacks, nightmares, night terrors, body memories, and I didn't know which was was up.

When we got lost, it meant riding a lot longer than I had planned. I wasn't prepared with dinner or snacks. By the end of the ride, I passed out and fell off the horse. I realized that if I did my part, maybe I could really enjoy riding. I could be present in the mountains and I wanted that. I wanted it enough to get myself back on track. I wanted it enough to speak up about how much I loved it.

Since then, a lot has happened... I have been riding almost every week, and sometimes more than that. I have become a pretty good rider, and I love it even more now than I did then. BJ bought Sunny, and I love that horse! I have been all over the mountains on some AWESOME rides! I have learned a ton about myself through the horses and riding. I have had healing through riding that I don't think could have come any other way.

I am a new person because of that ride a year ago. 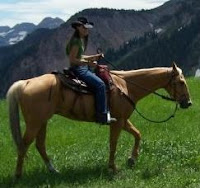 On the ride yesterday, we went back to that same place. It was awesome to be there and to think of all that has happened in a year. There has been so much change, and yet... I still have so far to go. look forward to sitting on the top of the mountain next year and look back... Where will I be? What will it be like then? Who will I be?
so says Me at 2:38 AM