Across the street from me is a sign, "Lose a half a pound or more a day!" At least twice a day, I look at it and it annoys me. Last night, K made a comment about it.

I told her I had thought about stealing it before. And then... she did it!

Email ThisBlogThis!Share to TwitterShare to FacebookShare to Pinterest
: silly smiles

Lately, my life has been completely consumed with the past... trauma... problems... crap... Nightmares... and "stuff" and... anyways, my insides have been tied in all sorts of knots. 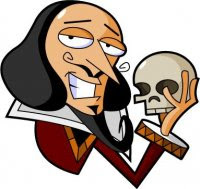 Tonight we went to Justin's play, The Complete Works of Wllm Shkspr. So much fun. Laughed the whole time. Loved it!

It was the deep down kind of laugh...
Not the "I am supposed to laugh and smile."
Nor the, "I am nervous, so I am laughing."
But the "I can't help but laugh, because this is funny, and I am completely caught up in the funniness."

So all those knots? Gone. I can breath. I can think.
I'm smiling just because I feel like smiling.
so says Me at 10:52 PM 3 comments:

Email ThisBlogThis!Share to TwitterShare to FacebookShare to Pinterest
: coping, self-care, things I love

Then he did the unthinkable. Sometimes he can just be so CRUEL. He told me to lay down and get comfortable.

He's been reading Waking the Tiger. The assignment from the book I never did? Because it freaked me out so DAMN MUCH!?! He asked those questions, "How do you know THIS is comfortable?" "What do you feel in your body?" and (not from the book), "Why are you crying?"

I don't know why I'm crying... except that I feel like crying... welcome to laying down with Jen... I wish I could remember his other questions, because they were so much better than they used to be. They got me to that incredibly yucky, overwhelming, need to go there, DON'T WANNA, place.

He cried. Paul cried! He told me that it was not only okay that I feel all those things, but it is natural. And although I may want to show them by putting them through that, I don't have to. My words just might help them understand. I put it it well enough for him to understand.

He said it made sense that I would feel that so black and white. I am either the Victim or the Rapist. He promised there was an in-between. A "Righteous Indignation" that would be where God really is.

He gave me the assignment to look up scriptures and resources on "Righteous Indignation". Find information on when its okay to stand up for yourself.

Does that even exist? I told him I had never looked up that term, but I had looked up "Women's Rights" on the church's website, and I only found a bunch of trash. Stuff like, "Stop talking about women's rights and talk about responsibilities and opportunities." It even included the "opportunity" to give sex when you didn't want to. And serve your spouse. And the "right to say no is not as important as the opportunity to say yes."

He told me that one day he saw me teaching people. There is an avalanche of "stuff" being taught that God lets his people teach, because there is some good, but there is also a lot that needs to be changed and "tempered". I have a special ability to do that.

I confused him by smiling. If I had not been raised in the home I was raised in; If I did not have to learn how to "mediate" to protect my brother; I would not be able to to talk with the calm that I do now. There is a lot of emotion that I need to feel. (I need to NOT be the calm mediator that lacks emotions just so people will listen. I NEED TO YELL AND SHOUT AND SCREAM!) Still... I do have an ability to speak so others can listen. I would not have that if I had not HAD to have that when I was very young.

I had one of those "see-the-big-picture-and-all-that-I-can-do-because-of-the-crap" moments. I don't think for a second God wanted me to be hurt, but He did know me well enough to know who I could become because of it.

Not sure if its possible to feel COMPLETELY wiped out, and energized at the same time, but I do.
so says Me at 1:22 PM 1 comment:

Email ThisBlogThis!Share to TwitterShare to FacebookShare to Pinterest
: change the world, The R word, therapy, Waking the Tiger

Because my brain is currently in the year 2000... I went looking for pictures. I don't have many. But here is what I have:

Henrietta the Hedgehog.
She got put to sleep in March 2000. I didn't even care enough to cry or be angry. I am now.

Santa Larry... He dressed up and went to his sister's house. (Christmas 1999)

My friend was trying to get a degree in photography. She asked us to come play models for her. 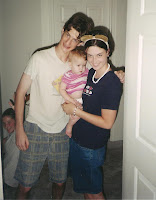 This was right after Larry and I got married. The whole family went on a trip to Washington D.C. I wanted to go there so bad, but the trip was hell. This is my brother, Zack, and my cousin, Ruth.

Us with my old roommates in Spring 2000. 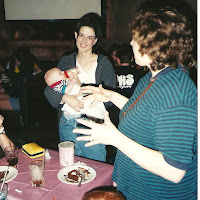 A dinner with Laurie (the orchestra teacher that saved my life). I worked as her assistant and planned the high school music department tour. We went to Las Vegas. Larry loved this picture of me. He said he couldn't wait for us to have kids... He knew we would make beautiful children. I was good looking, so was he... blah!
I don't know WHY I felt it so necessary to find and share these pictures. I just DID. So I am. I look happy in all of them. Why is it that when I look back I don't feel happy...

I KNOW what was happening to the person in these pictures. It wasn't good. I guess I hoped to see some evidence that what I am going through and feeling now is justified. I mean if I could see misery or heartache in my eyes, then it would make sense to be hurting now, right?

Email ThisBlogThis!Share to TwitterShare to FacebookShare to Pinterest
: flashbacks, therapy

The guilt. If you can't laugh at it, then really? What's the point?

I am suddenly aware of a lot of people trying to MAKE me feel guilty. Like TV and radio commercials:

"For just a few dollars a month you can make the life of an animal better. If you don’t send us this money, these animals will die because of YOU. All you had to do was write us a check and this animal would have lived."

"For only a few dollars more a month, you can feed a hungry child, educate it, and make its future bright. By not rushing us this money, YOU are personally responsible for the wide spread illiteracy and hunger across the globe."

"And since you didn’t buy pink ribbon items (or post your bra color to build awareness) you are most certainly hellbound."

You couldn’t buy a DARE shirt to keep kids off drugs? Shame on you, selfish bastard!

(Why is it that I think this is so darn funny? And why doesn't anyone else??)

Email ThisBlogThis!Share to TwitterShare to FacebookShare to Pinterest
: guilt, sometimes I can be slightly sarcastic

The book (Five Languages of Apology) talks about those people who are constantly apologizing... You know? Like Jen?

"I assume its my fault - When things go wrong in relationships, I just assume it is my fault. So I apologize. I always feel like I am in error."

When I apologize, I apologize for existing... That kind of apology does not feel sincere or helpful. Dann doesn't feel like I am trying to change or get better or even acknowledging his pain. Even when I DO apologize for something I did, and I try to be sincere, he doesn't feel it, because I am ALWAYS apologizing. If I decided I was worth more than shit, and stopped apologizing for breathing, then when I DID apologize, he would feel it. He would feel loved.

"I want to get it over with - They are willing to accept responsibility and apologize even if they do not sense that they are at fault simply to get the issue settled."

I have done this out of fear. If it wasn't resolved, and quickly, things could get really ugly. In my home growing up, with Larry, with Dann.

"For (the overly apologetic), they desire peace at any price. They would rather admit wrong if the arguments and conflicts will cease. Emotional calmness is more important than being right. While this may appear to be an admirable trait, it often simmers as inner resentment.
Such internalized resentment often creates emotional distance between two individuals. On the surface things seem to be relatively calm, but underneath and emotional explosion is in the making. Failure to process the resentment can lead to the destruction of a relationship."

Email ThisBlogThis!Share to TwitterShare to FacebookShare to Pinterest
: Five Languages of Apology, relationships

I stole (and by stole, I mean borrowed) BJ's book, The Five Languages of Apology, because I wanted to understand what he was trying to learn... I wanted to support and help him... and I like learning new things. I didn't think it would effect me so much.

I LOVED this part:


Genuine forgiveness and reconciliation are two-person transactions that are enabled by apologies. Some, particularly within the Christian worldview, have taught forgiveness without an apology. They often quote the words of Jesus, "If you do not forgive men their trespasses, neither will your Father forgive your trespasses." Thus, they say to the wife whose husband has been unfaithful and continues in his adulterous affair, "You must forgive him, or God will not forgive you." Such an interpretation of Jesus' teachings fails to reckon with the rest of the scriptural teachings on forgiveness. The Christian is instructed to forgive others in hte same manner that God forgives us. How does God forgive us? The Scriptures say that if we confess our sins, God will forgive our sins. Nothing in the Old or New Testaments indicates that God forgives the sins of people who do not confess and repent of their sins.

When a pastor (or the damn Bishop!!!) encourages a wife to forgive her erring husband while he still continues in his wrongdoing, the minister is requiring of the wife something that God Himself does not do. Jesus' teaching is that we are to be willing to forgive, as God is always willing to forgive, those who repent. Some will object to this idea, indicating that Jesus forgave those who were killing Him. But that is not what the scriptures say. Rather, Jesus prayed, "Father, forgive them, for they know not what they do." Jesus express His heart of compassion and His desire to see His murderers forgiven. That should be our desire and our prayer. But their forgiveness came later when they acknowledged that they had indeed killed the Son of God.

All those men that gave me instructions... The bishops that insisted I had to forgive, even if he was still hurting me... They just had everything out of context. They didn't understand. And that's okay. I forgive them for not knowing...
so says Me at 8:32 PM 1 comment: