Check the facts... and then believe them

One of the skills I learned in therapy was "Check the facts".
Basically, although the emotions we feel are very real, sometimes the stories we tell ourselves that create those emotions aren't real.

A very simple example: No one has called me on my birthday, they don't love me, they don't care about me... Check the facts and find out your phone was off. Several people tried to call, but couldn't get through. They left voice messages. Suddenly the emotions are gone, because the story wasn't accurate.

One of the stories I believed came from another person. Lolly has said that my presence made people uncomfortable, everyone hated having me around, and I was hurting other people by being.

I believed her. I didn't question it. It didn't even cross my mind to use my skill of "checking the facts", because I really believed what she said was fact. BJ didn't believe her... He told me to talk to the people that supposedly hated me...

I was anxious. I was scared. I wanted to crawl in a hole. I didn't. The conversation went like this.


Me: I don't want to cause problems, or make things difficult for you and I know you care about Lolly, and I don't want to change that either... What I'm trying to get at is.... She said that you hate having me around, and that you don't want me here, but you are too nice to say anything. I want you to know if that's the case, I don't need you to be nice for nice sake, you can tell me to never come around again. You can be completely honest with me.

Claire: To be completely honest, before I met you, and I'd only heard Lolly's side, I didn't like you. I wouldn't have chosen to have you in my life... but... then I listened to more of the story, I met you, I spent time with you, and that is not how I feel at all. You're a sweetheart, and I'm glad I know you.


That conversation was several months ago. That should have been the end of it, but I still didn't believe her. It was easier to believe that I was hated, and Claire was just too nice to say so. Two months ago, she called to invite me to dinner in her home, and also said I was welcome ANY time. I still wouldn't believe her. Logically, I know that trusting Lolly to tell me what Claire thinks and feels, and NOT trusting Claire is irrational and silly... but it's hard to let go of the belief that people don't want me.

The truth is, it has nothing to do with Lolly or any of the stories she tells. I BELIEVE that I am not wanted. Deep down, I still play the same message that I have always played, "The world would be better off if you didn't exist." So, every time someone else agrees with that message, it breaks me apart. I believe the false story over the real story. I cling to it. (Like a fucking crazy person!) For whatever reason, it is scary to let go of that old belief... don't know why... I might figure that out later, but for now... I'd just like to let go. 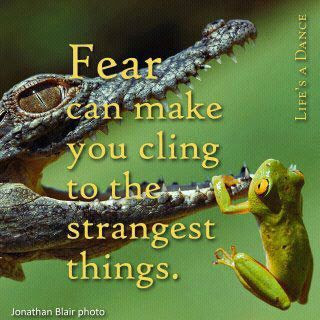 I'm tired of believing the old shit. I'm tired of that old message. It wasn't true when I started believing it (whenever the hell that was), and it isn't true now. (I'm not saying that everyone loves me, that would be just as ridiculous, but I know I am loved. I also know that the people who tell me they love me now, can mean it, because I have let them get to know me.)

And... on top of it all, the one thing I know for sure: There is a lot of peace in knowing what IS, instead of pretending to know and believing what is NOT.

Email ThisBlogThis!Share to TwitterShare to FacebookShare to Pinterest
: relationships, therapy