I recently did an interview for the podcast Mormon Stories. 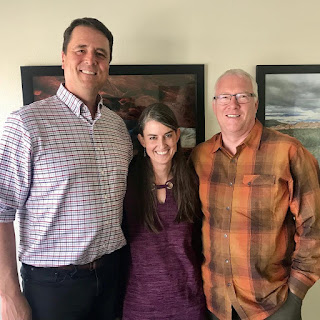 I'm not sure what I expected. I wanted for Todd to be able to share what it was like to be the bishop and be torn in two directions: a wife that wanted him to stay home and take care of her, and the responsibility he felt to take care of and care for his ward members. I wanted him to have a chance to talk about what it felt like being totally unprepared and uneducated, but wanting to help all of his ward members in whatever way he could.

He truly wanted to be like Christ and care for the least of these. He paid attention to those who needed someone to care. I had given up on anyone helping me. I wasn't interested in his help or support, but he insisted, and I am forever grateful.

I also wanted to tell enough of my story to help people like me. I remember what it was like to not know anyone who had recovered. I've talked about it on this blog often. I wanted to be able to say, "I survived. I am thriving. I am happy. It will be okay for you too." When times were really hard, I would imagine future me (present me?) telling (past) me how she got through it. I'd imagine what it would feel like to see someone happy - really happy, and not just faking it - and hear that they had been through hell too.

I met a few people eventually, but not when I was at my worst. (How do you go out and meet people when you are crippled with pain, seizures, flashbacks, nightmares and night terrors that prevent you from sleeping for days on end? I was lucky I showed up for work most days. Friends and outside activities were not a possibility back then.)

I wanted people to understand that I was not crazy, and how trauma deeply affects everything in a person's life. I thought of McKenna Denson, and the way they discredited her. I thought of what her bishop said about her, and understood that might have been why I was so often dismissed. Why I wasn't helped, but instead sent home to read books about marriage or go to the temple more or submit to my local leaders better... all of the things that made my life worse. I believe every bishop meant well. Not one of them thought, " How can I make this girl feel more worthless and more like she has no authority or say in her own life? How can I make her life a living hell?"

They didn't. They did the best they could, and their best sucked!

I thought of the other leaders and members that said horrible and stupid things. I knew I might not be able to make them understand and do better, but I wanted to try.

I wrote out an outline of my life. I wish I had picked more specifics to focus on, so that I could be really clear on a few things. I didn't. I let John guide me, which was mostly fine. It was really helpful considering how nervous and anxious I was. It's amazing how easy it was to forget things when I was on the spot.

I'm glad I did the interview.
It was posted live on the Facebook page, so I had friends see it live. I hadn't really thought about that until after it was over and I had old roommates from BYU commenting and friends from high school sending me messages.

The one message that made me sit on my floor at the office and cry came from a girl that told me she wasn't going to go into details, but we probably saved her life with that interview. Others told me they'd never heard dissociation described that way, but they had lived it and always felt crazy.

There are a few things I wish I had said, but didn't.

I wish I had listed out what Todd did right, so it was more clear.

John also asked me why I didn't talk to Larry about how much I hated sex.


I forgot how much I tried to talk to him, and how I usually ended up apologizing for being a failure as a wife. I forgot how it made him mad when I moved or made a noise while he was having sex. I forgot how I locked myself in the bathroom because I didn't want him to touch me, but I couldn't stay in there forever. I forgot that I believed I could only talk to Larry about it - to go to someone else would be betraying the sacredness of marriage.


I mentioned that I lacked the knowledge and the vocabulary to talk about sex. I could have gone into more detail.


I didn't like it. I had never felt sexually attracted to anyone, so I had zero place to even begin. I wanted to like it. I wanted to do my duty as his wife. I knew that no woman liked sex, I just didn't know I would hate it as much as I did, but my hatred of it was just a sign that I was a horrible person. I still wasn't worth anything. The only way I could show that I was worth all the money spent on my treatment was to get married in the temple. The only duty of a wife is to keep her husband happy and to have sex with him when he wants it. And I wasn't willing to do that. I was still worthless.


John also finished the interview by asking how Todd and I got together.
I honestly couldn't remember how that happened. The truth is, it was so gradual, I didn't know it was happening.

He was my bishop. He gave me shelter when I needed it. He was my friend. I went through a divorce and started distancing myself from the church. We were both in therapy and doing assignments together. We rode horses together. We talked all the time. I worked for him at his business. He told me about his struggles in his marriage. I encouraged him to talk to her. That didn't work, so after a year and a half of her refusing to go to therapy to work on the marriage, he moved out, but it was still too close to his soon to be ex-wife. He was overwhelmed with trying to deal with all that he was going through and had to get away. He decided to move himself and the business a few hours away. I rented a room in his basement. His family shunned him even more than he was already experiencing, so I was his only support for a while. I loved him for the way he'd helped me, and the way he was trying to be honest, and for how hard he was fighting. I talked to his wife trying to help her understand why he had left her, hoping that maybe they could work things out. They didn't. We still rode horses and worked together. We talked all the time. We started going fishing together. I became friends with his sister. We went together to visit her in Montana. I realized I liked spending time with him and family, so started inviting him to my small family gatherings. We decided to move to a new house. My room was across the hall instead of in the basement. We signed a lease together! I realized I wanted to be with him, and I wanted him to be with me. Not sex. Just together. We went on a cruise with my family. Slept in the same bed. I felt safe and wanted to sleep next to him all the time. We bought a house together. We are now each others' family, and I love that. Sometimes people call him my husband, and I don't freak out about it.


The last thing I wanted to talk more about, but didn't was in response to something John said about marriage being hard and your spouse will hurt you.

I still think that life is hard, but marriage shouldn't be.
That requires a lot of self awareness and that's not easy. You can't just decide to be self aware. You have to work your ass off to learn how to talk about emotions, what your own triggers are, how you express certain emotions, what you do when you're tired, hungry, or emotionally vulnerable.

Yes, there are moments when Todd or I might say something accidentally hurtful, but he has never intentionally tried to hurt me. He has never once said something to cause me pain. And I can say the same about him. When the accidentally hurtful has happened, we've talked about it and we are both aware enough to be able to say, "I'm sorry," and "I'll do my best not to do that again."
We also are aware enough to say, "I know you didn't mean it this way, but I am feeling insecure and sad, so what you said really hurt," when that is the case.

We also talk about what we expect, because a lot of hurt comes from unmet expectations that are never talked about. By talking about expectations, we can also say, "I can't do that for you," or, "I will gladly do that for you." We know what we have to work with.

We aren't married. We plan on being together for the rest of our lives, but if there comes a time when this is not a healthy and happy place for both of us, we won't hold each other here. That's the kind of thing that can happen with a lot of work on yourself and being in a relationship with someone who is also working hard on themselves. This relationship doesn't feel like work. It feels like I have a partner to share my life with.


Everything else in the interview, I feel good about. I haven't listened to the podcast, because I am pretty sure if I heard myself talking, I'd feel self conscious and might hate it all. I know I was nervous and shaking.