Talking to a friend yesterday. She just had one of "those" sessions.
I wanted to be able to say, You can totally do this. And once you're through, it will be totally amazing. I want to know that, but I don't yet.

The best I can say, is this is where the healing begins. This is where it starts.
And I hope its amazing when we all get to the other side of this.
so says Me at 10:23 AM 2 comments: 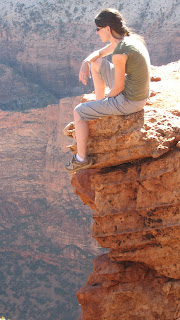 I have wanted to hike to Observation Point in Zion National Park for a long time. It is one of the highest points in the whole park. You look down on Angel's Landing, which is the most famous hike in the park. You can see everything from up there. (At least everything in the "Main" Canyon.) I really, REALLY wanted to see that.
The only hike I knew of was 8.6 miles (round trip).Climbing 2500 feet (and then descending again).
A little intense.

I begged Dann to go with me on our last trip. His back said, "No way!" and the rest of him pretty much agreed.

I am so excited that I found a way to see observation point, without killing me (or Dann). 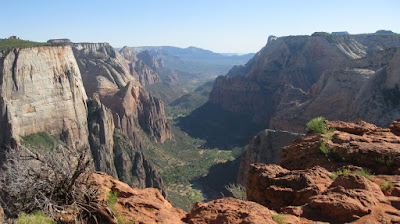 Email ThisBlogThis!Share to TwitterShare to FacebookShare to Pinterest
: self-care, things I love

Rode hard (mostly uphill, running when there was flat ground) for three hours.
Ate lunch sitting in the middle of a water fall. (Maybe you could even call it TWO water falls, but the second will be completely gone in a few more weeks when there isn't as much melting snow.)
Rode hard (ALL uphill, rocky) for a couple more hours.
BJ was in front. Went through a patch of deep snow. I thought he was going to break a leg. (If it had been solid ground and not snow, Bo would have crushed BJ's leg.) He got through it.
I chose to walk Sunny through that snow patch. MAN am I grateful for that horse. Thought I was going to die walking up just that little bit.

BJ and Bo slid down the mountain... He was worried he was going to be stuck at the bottom forever. Both Bo and BJ got up and out, and both were exhausted after the climb.
Sunny and I had to work together on some very rough terrain. I had to trust him. He had to trust me. Best feeling ever! I love that horse!
"Caramel Cob" is a very handy and delicious treat while on the trail. (You don't even have to touch it to eat it. Which was especially nice for BJ, since Bo peed on the lead rope.)
The wind was strong enough to pick up my hat and blow it several feet. BJ saved it from going over the edge of the cliff. Thanks BJ!
We ran. And ran. And ran.

Sunny decided rather than to slow down to go around rocks and branches, or to just walk through a stream, he'd jump OVER them. Exhilarating!
In one jump, I flew out of the saddle. I still don't know how I stayed on the horse. I would love to say it was because I am a great rider, but I know better. Angels were watching over me...
It took us five hours to get up, and two to get down... What a rush!

While on the horses, I was not concerned about the past or the future. I felt peaceful. "However it works out, it will work out." And I really meant it. There will be sadness and/or hard emotions to go through no matter what happens, and I'll go through them. Completely at peace with where my life is and where it is going.

I was totally "in the moment". I noticed so many little details I never would have seen before. Individual leaves and branches and rocks. Lizards, snakes, chipmunks all seemed so amazing and fascinating. Even my sandwich tasted better than a sandwich has ever tasted.

Ended the day so tired, I couldn't think straight... and that's okay, I didn't need to think anymore. I went to sleep. And actually slept!
so says Me at 1:46 PM 2 comments:

Email ThisBlogThis!Share to TwitterShare to FacebookShare to Pinterest
: horseback riding, things I love

Loving this song. So intense.
The first verse is the one that hit me the most:

Open up wide, swallow down deep
No spoon full of sugar could make it sweet
The cancer inside stealing my sleep
Night after night it keeps haunting me
The secrets I keep
Are tearing me up inside
I try to hide and then I wonder why
Why I’m still running when I know there’s no escaping

Come undone, surrender is stronger
I don’t need to be the hero tonight
We all want love we all want honor
Nobody wants to pay the asking price

Fall on my knees, fall on my pride
I’m tripping over all the times I’ve lied
I’m asking please, but I can see in Your eyes
You don’t need tears for alibis
It’s true what they say
Love must be blind
It’s why You’re still standing by this sinner’s side
You’re still by my side when all the things I’ve done have left You bleeding