I have all the problems. #chronicpelvicpain #endo

For years I was told my chronic pelvic pain was due to sexual abuse. There was nothing that could be done for me. Go back to therapy.

No one asked me about my pain. A couple doctors did exams and no one mentioned anything like endometriosis, vaginismus, pelvic floor dysfunction, vestibulitis or vaginitis. No mention or even checking for yeast infections or bladder infections a few of the times I went in. (I have been diagnosed and treated for every single one of these things in the last two years. Not all at the same time. Instead we fix one problem and discover another one that has either been there all along or has appeared because of the treatment of the last things.)

I'd just like to state: any doctor that tells you sexual abuse is the cause of your pain is full of shit - especially if they don't offer you actual medical helps.

It's possible the trauma to my nether regions is part of the cause of some of my pelvic pain. AND. There are ways to manage and treat chronic pelvic pain. Pain killers. Physical therapy. Muscle relaxants. Vaginal Valium suppositories. Oral Valium (or other anti-anxiety medications). Trigger point injections. Nerve blocks. Medications to help quiet the nerves like amitriptolene or gabapentin (and others).

Not to mention if there are other things going on, there's treatment options for those too. I've had two surgeries for very real endometriosis, adenomysosis, and adhesions (scar tissue). I've also had several rounds of steroids to treat a very real case of vestibulitis. (Chronic inflammation of the vestibular region of the vagina. It is most often brought on by infections or sometimes surgeries or activities like cycling or horseback riding.) Another surgery for very real kidney stones and a kidney infection. Antibiotics for uti's and treatment for a yeast infection.

Every doctor and physical therapist I have seen in the last two years (once I finally stopped listening to the non-helpful ones), said they wished I'd come sooner because all of my issues would have been easier to fix if they'd caught them earlier.

Tonight, after a hard day at the doctor's while he tries to sort out how to help and heal me, and after trigger point injections that are painful and upsetting to women who haven't been through what I've been through, I'm angry. I'm angry at the doctors who didn't listen to me. I'm angry that they never asked about my symptoms. If they had, they would have known I had all of the symptoms of endometriosis. It was so progressed that my bowels and bladder (and the rest of my innards) were fused and twisted together. If someone had paid attention to my pain beyond just that I had been abused... they could have caught it, stopped it from progressing, maybe even removed it before it got so bad. And I would not be where I am now.

I also want credit. I've been raped repeatedly. I was sexually abused as a child, and then again as an adult. I suffered from complex ptsd. I refused to stay suffering, and fought like hell to find and create a life worth living. I could have kept refusing to go to doctors - especially after I had one hold me down while he performed an exam. I could have decided to quit at any point, but I haven't. Even now, I'm still going to doctors. I'm still facing treatments that are triggering and upsetting and make me remember shit I would still rather not remember.

Going to the doctor without panicking and dissociating was never the goal I was working for, but I've done it. A whole hell of a lot. And I just want a big old pat on the back and huge attaboys for how fucking hard this is, and I'm doing it. I will get past this pain, and I will continue to create the life I want. Which means, I will still keep facing my deepest fears and the darkest places. I will keep going to the doctor. I will keep talking about how it hurts, what helps, what doesn't, and I will continue looking for ways to heal my body and my brain.

To go to happier topics, or "silver lining" or whatever, I did get a treatment suggestion I like: Though the doctor has said I still can't (or shouldn't) ride horses yet, he did tell me to go sit in an ice cold lake. Now that it's getting warm enough the ice is melting off the lakes, I will be out there stillwater fly fishing from my little kick boat. Doctor's orders. 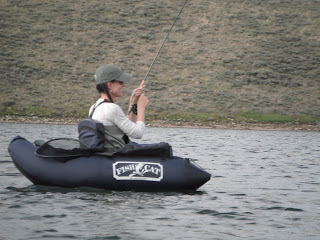