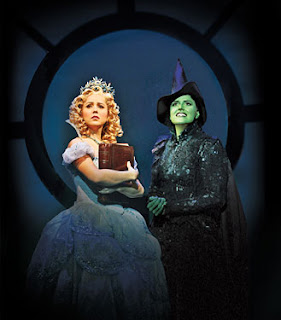 I had lots of thoughts while watching:

As l I was watching the cast take bows, I realized the stars of the show are both female. Although there is romance in the story, the romance is not THE story. I like that.

The whole play is about why they called the wicked witch Wicked. She wasn't, but it served the "other side" to have a villain. She saw injustices. She wanted to help the Animals. The wizard was the one hurting the Animals. He wanted her power, but when she wouldn't give it to him, he made her into the villain. The whole land of Oz united under the wizard to hunt down the wicked one.

I thought of how it felt leaving the church. They call those of us that leave apostates, anti-mormon, angry, bitter, and often even evil or wicked. What if instead of villainizing people, they listened to what they had to say? Couldn't they then make changes that make them into a better organization?

I thought of all of the politicking that goes on. It's ALL about "us" vs. "them". I feel frustrated trying to learn about Obamacare, because there are two sides that are both very extreme. Neither one makes sense. (It will not save the country, and it will not end the country.) I feel frustrated with the elections, because the politicians are ALL trying to get people to like them so they can gain power. All of them believe they can help and serve the country. None of them are "all good" or "all bad", but they all want you to believe "I am good. My opponent is bad."

In Wicked, they let you see the motivations of pretty much everyone. Everyone wants to do "good" and they believe they are. Even the wizard. He was trying to give the people what they wanted. He believed his lies were helpful. (All that I can think of is the quote, "Some things that are true are not very useful." vs. the quote from the play, "Truth isn't facts or reason, it's just what everyone agrees on!")

He explains it in his song, Wonderful:


WIZARD: See - I never had a family of my own. So, I guess I just - wanted to give the citizens of Oz everything.

ELPHABA(spoken) So you lied to them.

WIZARD (spoken) Elphaba, where I'm from, we believe all sorts of things that aren't true. We call it - "history."
(sung) A man's called a traitor - or liberator
A rich man's a thief - or philanthropist
Is one a crusader - or ruthless invader?
It's all in which label
Is able to persist
There are precious few at ease
With moral ambiguities
So we act as though they don't exist


People ARE more comfortable believing that everything is either good or bad. Right or wrong. But that is NOT reality. It's all just an unhealthy game of pretend. Reality is, "It's not good. It's not bad. It just IS."

(Side note. This makes my think of my high school history teacher. He did an awesome job of helping me to understand that there are way more sides to the story than what most history books tell you. The founding fathers were traitors to their country. They were radicals. My teacher even compared them to the man who bombed the WTC in Oklahoma. Killing people is acceptable if your side "wins".)

Defying Gravity is one of my favorite songs. I have loved the lyrics for a long time.


GLINDA (spoken) Elphie, listen to me. Just say you're sorry:
(sung) You can still be with the Wizard
What you've worked and waited for
You can have all you ever wanted:

ELPHABA (spoken) I know: (sung) But I don't want it - No - I can't want it
Anymore:Something has changed within me
Something is not the same
I'm through with playing by the rules
Of someone else's game."

Glinda tells her she can still have all the things she wanted, but she doesn't want it anymore. She has seen "behind the curtain", and it changed her. Even if she wanted to, she can't go back to being the person she was. That felt familiar. I don't want what I used to want, because I have been changed.

"Too late for second-guessing
Too late to go back to sleep
It's time to trust my instincts
Close my eyes: and leap!"

I LOVE these lines. It's "too late to go back to sleep", so I'll trust my instincts. Amazing things happen when you can just trust your instincts.


"I'm through accepting limits ''cause someone says they're so
Some things I cannot change
But till I try, I'll never know!
Too long I've been afraid of
Losing love I guess I've lost
Well, if that's love It comes at much too high a cost!"

I have repeated these lines to myself over and over and over.
I'm not going to pretend to be someone I'm not, just so that people will love me. "If that's love, it comes at much too high a cost!" And realizing that if the only kind of love I can have from people comes if I am pretending or pandering to them, I've already lost love, because that isn't love.

The whole show was amazing.
I loved looking forward to going to the show for the last five months. (My ticket was a birthday present.)
I loved the company I was with.

SO grateful I got to go!