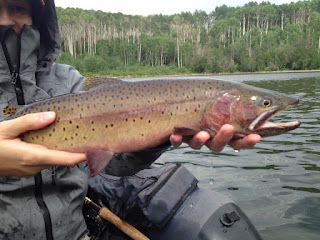 Yesterday, I went fishing. I posted a picture on Facebook of a beautiful cutthroat trout I caught. The picture shows his impressive coloring and length. The picture doesn't show much of my face, because despite the fact that I had just caught a 26" cut throat trout in a small lake in some of the most beautiful country there is, I had just  been fighting back tears, because I was tired and discouraged and depressed.


We had hiked a mile in to the lake, and it took everything I had to keep trudging up and down the hill. I'd cried before we left, because I felt discouraged that I wasn't excited for this great day of enjoying the beautiful outdoors. All I really wanted to do was go back to bed.

I wanted to enjoy fishing, but I was in pain, and that pain has me so discouraged and depressed. It's hard to enjoy fishing or hiking when it feels like I have a hot poker stabbing my bladder, which causes weird cramping to radiate down my legs, up my back and stomach, and I generally feel unwell and tired. 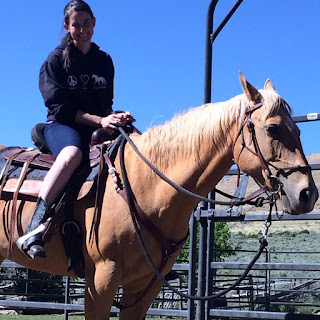 A few weeks before that, I posted a picture of myself on Sunny. I rode him around our two acre pasture for less than twenty minutes, and then had to get off because I was in enough pain that I was near tears and it wasn't fun... and this is my horse, and I love this horse, but it wasn't fun riding him. I only got twenty minutes in and my body decided that was enough. Again - hot poker stabbing my bladder which is extra triggered by sitting in a saddle (or on any hard surface). The muscles get tight and then I'm sore all over.

This week my blood pressure has randomly decided to drop to unhealthy lows. It could be medications I am on. It could just be chronic pain (it turns out that does funny things to the brain and the body). It could be something else completely unrelated, but it means I have spent a lot of time laying down because I feel shitty.

I also work at a job where I can do some of what I need to do while laying down on my couch (as long as I can focus on a computer screen, which wasn't possible every day last week). When I can't work, I have a great partner who takes over and does both of our jobs - and he's had to do that a lot over the last seven months. I'm so lucky. I don't know what I would do if I just had to show up for work anyway - I have worked when I was sick. I remember what it was like to lay on the bathroom floor, dry heaving and vomiting, and then trying to go back to my desk as if I was fine. This new lifestyle is much better.

I had pretty major surgery seven months ago - it turns out that can take a long time to recover from. I have the money and the time to go to doctors, specialists, physical therapists, more doctors, and psychotherapists to help me get through all of this. I also have an amazing partner who says he'd bring me flowers if he thought I'd appreciate them. (He bought me a new fly line. As soon as I'm excited to fish again, that's be way better than flowers.) I am so lucky. I'm in debt now - which I wasn't at the beginning of the year, but I paid cash for the first couple thousand dollars. I have insurance which thus far (just this year) has covered $49,000 worth of hospital/doctor bills. I have no idea what I would have done without insurance and money.

I have family who care. Todd's sister hasn't been real healthy either (cancer followed by Myesthenia Gravis, if you don't know what it is, feel free to look it up. I didn't know until she educated me. For her, it mostly causes her a lot of pain and fatigue.), so we had a movie day where we sat and ate popcorn and fell asleep to the movie Zootopia.

My dad has been dealing with chronic pain for way WAY too long, so he's been giving me advice and support. And the rest of the family doesn't know what to do, but I feel supported, so that's good.

I am regularly using Valium suppositories - which aren't supposed to be absorbed into the blood stream - they're just supposed to be absorbed into the pelvic floor muscles to help relax them. I feel embarrassed to talk about taking this medication - as if I should be ashamed of it. I feel both glad it helps and a little upset that it seems to be causing me other issues: like dizziness and low blood pressure and possibly depressive symptoms.

I spend two hours a week with a physical therapist's hand in my vagina. She's stretching muscles, breaking up scar tissue, trying to get my bladder and bowels and everything to move around like it's supposed to. It hurts like hell - it is also super triggering. I no longer cry or freak out, but I also feel like that doesn't necessarily mean I'm okay with it all. It's a constant reminder of what I've been through. I can't escape the pain or the memories, because they are always there. Which sucks. While PTSD has not taken over my life now like it once did, it is now a constant companion again. I hate that. It makes me sad and angry, and afraid. My present life is good, and yet I can't get away from the life that I only barely survived once. I never EVER wanted to say that PTSD was something I had to deal with again, but I am.

I'm having nightmares a lot. I wake up crying - afraid that the life I have built with Todd has somehow been taken away and I am back with Larry trying to make things work - or trying to survive the hell that marriage to him was, but in my nightmares, now I remember what it's like to have a supportive partner and a home I love and my dog and cat and horses, and I wake up sobbing because I feel so sad for the girl that survived because she didn't know there was anything better.

I have a great therapist, and we spend a lot of time sitting in her office while I cry and she tells me that she is sad for what I've been through. A few months ago, she sent me this meme:

I had to have bowels, rectum, colon, and a bunch of other internal structures completely reconstructed because the endometriosis lesions and adhesion's had damaged so much of my body. I had at least nine doctors dismiss my pain because it was just caused by sexual abuse. If it weren't for all of the abuse I had endured, maybe someone would have caught the endometriosis years earlier, and the surgery would have been much less invasive. (And recovery much easier.) I'm angry at the men that abused me. I'm angry at the doctors that dismissed me. I'm angry at the system that failed me. For now, that anger motivates me to get up and go to the next appointment, try the next medication, try the next supplement, do the next exercise (physical as well as therapeutic), or whatever else I need to try to make my life what I want it to be. Sometimes my anger also motivates me to swear and throw things, but nothing breakable - at least not yet.

I'm discouraged. I'd thought I'd feel better by now. I thought surgery would have healed most of it, and five months of physical therapy would have healed the rest. I didn't plan on the extra trips back to the doctor or to the specialists or the kidney stones. I thought this summer would be a lot more fun, but it's been a lot of trying really hard to enjoy things I used to enjoy, but really just wanting to take a nap.

Last week, I tried what the doctor thought would be a for sure fix - steroids and numbing injections directly into the vaginal wall (where it meets the bladder wall). It numbed things for about four hours, except it felt like I was being stabbed with a needle when I peed. (Luckily that went away at about the same time the numbing went away, so... I don't know what all of that means.)

I'm depressed. I know what depression feels like - it could be a menopausal symptom. I did have my uterus, cervix, both tubes, and an ovary removed. I imagine that can mess with hormones enough to make me depressed. I also imagine everything I'm going through physically and mentally could make me depressed too. Whatever is causing it, I have it. Which also means I now have to be very aware that I don't have an appetite and I have to eat anyway. (For some people depression makes them eat more. I am not one of those people.)

I'm also fascinated. I know a lot about my body and medications and side effects and doses that I did not know last year. Science and nature are all very fascinating, and the art of treating people like me is amazing.

On Facebook, I spend most of my time posting about my dog. (Did I tell you about our foster dog?) Or my cat. Or the horses. Or the flowers blooming in the yard. Or my niece and nephew or Todd's grandkids. Or fishing. I love all of those things, and I want to share those things.

I also feel tired. I'm in pain. And I'm so very very tired. I don't want to be a drain, and I also want to be honest. I don't like pretending everything is wonderful when it isn't. I'd rather be real.

I have heard one can't feel contradicting emotions at the same time. That is false. I am happy and sad. I am grateful and grumpy. I am so angry and hurt, and I have compassion for those I'm angry at. I am hopeful and afraid. I am discouraged and have faith. I'm in pain and I still rode the horse and caught a beautiful fish. Really - I don't think it gets more real life than that.

So, here's to not sugar coating life, and just showing how it is. It's beautiful and painful and worth living.
so says Me at 2:41 PM