When I was a kid, I was a total "daddy's girl". I wanted to go everywhere with him. On Saturdays, I remember MANY trips to the hardware store. He always bought me something. Some little trinket, treat, something. I didn't go with him so he'd buy me something - I went because I just wanted to be with him.

People would tell me I have my dad's smile, and I thought that was the best compliment anyone could ever give me. I was HIS girl.

At the same time, I was afraid of him. As I got older, I realized that the way he treated some people around him (namely my brother) was just WRONG. I watched in horror as my hero fell. I was angry at him. I was angry at my mom for staying with him. It hurt. When I think about it, it still hurts a little.

A year ago, I still (mostly) believed that my parents would rather me die than leave the church. I was so scared of what my dad would think if he knew I hadn't been to church in months. I told my mom first. I let her tell him. He and I didn't really talk until that day a few months ago when he told me he loved ME. He saw the light in my eyes, and that was an answer to his prayers. He wants me to love me, and the church just kept getting in my way. 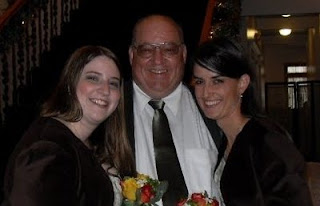 Since then, we've been able to just talk. And although I'll never be "daddy's girl" like I was when I was seven, I'm happy to know that my dad loves ME. I know I'm pretty darn lucky to have a dad that is willing to see me rather than what the church tells him to see. I'm also really grateful that he is him. Love you daddy!
so says Me at 9:53 AM

Email ThisBlogThis!Share to TwitterShare to FacebookShare to Pinterest
: family, love